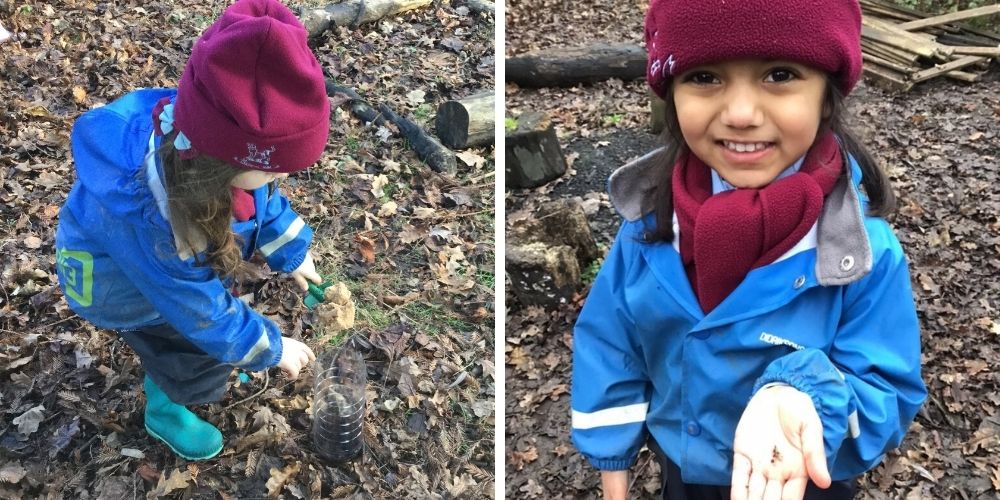 Reception children have some very exciting news! During our Maths lesson, whilst counting the trees in the woodland area, we came across three eggs in a nest! The children shared their ideas about who the eggs might belong to, what might be inside the eggs and what we should do. We agreed we should leave the eggs, find out more about animals that lay eggs and come back the next day. We continued to observe the eggs throughout the week, using Mathematical language such as ‘more’ or ‘fewer’ to describe the amount and recorded our findings in an egg diary. The children often changed their mind about what was inside the eggs but knew it was probably an animal that has feathers, a shell or scales after learning this from a video.

This week the children arrived at school to discover footprints in their classrooms! We spoke about who the footprints might belong to and where they were leading. Mrs Upson shared some photographs and a video of what she had seen before leaving school on Friday- dinosaurs in the classroom and on the playground! The children used their new knowledge of animals that lay eggs to identify that they may have hatched from the eggs! We went to check the eggs to find that they had in fact all hatched. The children are looking forward to finding out more about dinosaurs, especially now they have visited our school. Sparking curiosity and igniting wonder at its best!

Not only have Reception been discovering dinosaurs, but they have also been nurturing some worms. The children were showing a keen interest in worms! They were often observed hunting for them during their playtime. Inspired by their interests, we decided to learn more about worms during our Natural World session. The children first listened to the story ‘Superworm’ before learning worm facts, this helped them to think about resources needed to make a class wormery. The children learnt that worms are important to make healthy soil for plants to grow.

They worked as a team taking turns to make layers of sand and soil, noticing a repeating pattern and used their new knowledge to find dead leaves for the worms to eat. The children then used their gross and fine motor skills to dig for worms, they used language such as short and long to describe the length of the worms, they certainly found some superworms! As well as digging to promote their physical development, they also used the spray bottles to draw the worms to the surface. It was very cold so we tried to warm up by singing finger songs which included ‘There’s a worm at the bottom of the garden’. Since making the wormery, the children have been making daily observations, they found a worm wiggling down the side of the wormery when first uncovered. A short while later they noticed it had wiggled to the middle, they explained that this is because worms like the dark. The children have covered so many areas of learning and development during this activity!