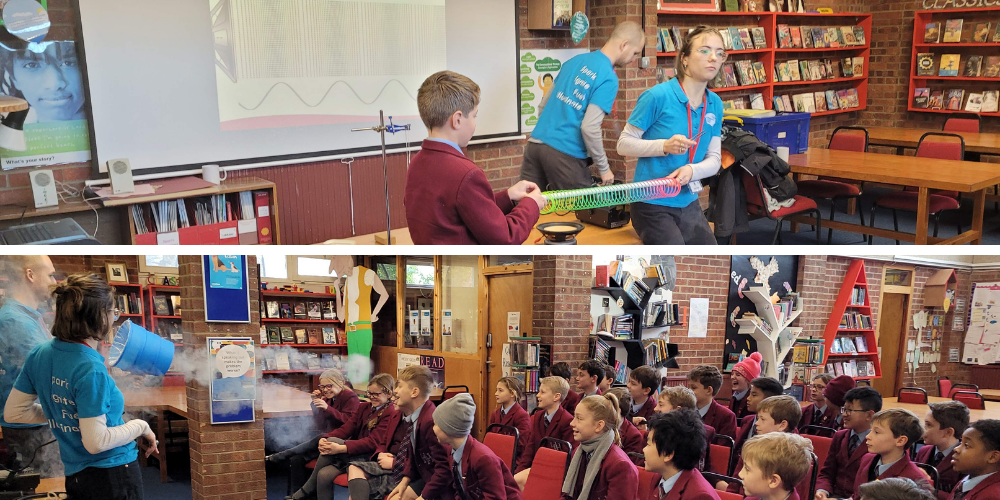 Years 5 and 6 had a visit from Mia and Alex from the Cambridge Science Centre. They came to give us a workshop on Sonic Sound.  They taught us how sound works, how it travels and how our ears work. This was an amazing opportunity to learn about sound with examples and lots of interaction. It was a fun process too!

They brought a lot of amazing equipment such as a smoke machine, a dismantled speaker,  an air bazooka, a tuning fork, balloon and a model ear. First they demonstrated how big the vibrations were by using a tuning fork, whacking it onto a wooden block and holding it against a ping pong ball and we watched it move with the vibrations.

Next, they used the balloon and pumped it up to show how vibrations are what created noises so they squeezed it and it made a noise. The air bazooka was used by filling it with smoke then firing it at us and we had to see if the sound was first or if the smoke came over our heads. It turned out that the further back you were you should have heard the sound first but if you were at the front first you should have seen the smoke first.

Then, we asked some questions and they shot us all with the air bazooka again and we said our goodbyes.