Home| Beyond the Classroom| Latest News| News| How is Shakespeare Relevant to Me?
Share Page

How is Shakespeare Relevant to Me? 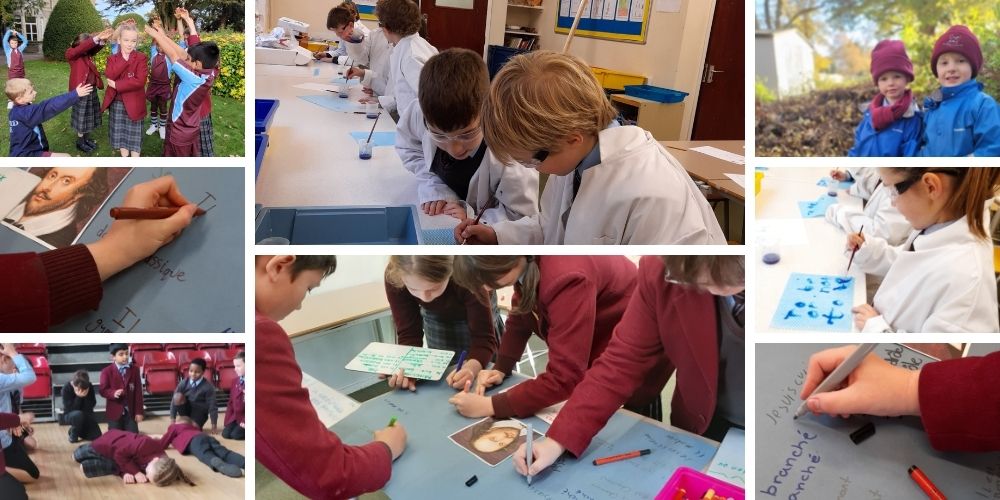 How is Shakespeare Relevant to Me?

How is Shakespeare relevant in our modern world? This question really sparked the childrens’ curiosity as all the children, from Reception to Year 8, were challenged to think about this question across the curriculum in a fascinating and insightful Shakespeare Week.

Our Reception children explored the magical world of ‘A Midsummer Night’s Dream’.

They made magic flowers like the one in the story that made the characters fall in love.  Their flowers had lots of other magic powers such as; making them feel happy, sad or sleepy and they had fun taking part in a science experiment to make a magic potion. They also looked closely at real flowers and created pictures using pastels. Imaginatively, they used their Natural World session to transform the Spinney into a Midsummer Night’s Dream with a fairy hunt, where they searched for mischievous fairies, making a patch of soft moss where Titania might sleep and finding plants that Puck might use to make his potions! They concluded the week by making stick puppets of the character in ‘A Midsummer Night’s Dream’.

The Pre-Prep children also looked at ‘A Midsummer Night’s Dream’, with Year 1 creating a new magic potion for Puck and writing instructions on how to take it and describe what happens. They made a fairy wand using a stick, wool and collage materials and engaging in role play using their fairy wands during outdoor learning. Year 2 created their own magical woodland setting and characters to go with the play, as well as writing their own magical stories! Meanwhile, Year 3 created a non-fiction mini book on Shakespeare, writing a newspaper report on the strange goings on in the forest as well as making potions. In science they carried out investigations into which type of paper would be better suited for William Shakespeare to write his plays on.

Romeo and Juliet was brought to life spectacularly by Year 4 as they created and performed a modern day version of Romeo and Juliet, using just music and mime.  They were also challenged to write a diary entry from the point of view of either Romeo or Juliet.

Year 5 acted out scenes from ‘The Tempest’ and created a non chronological report on Shakespeare. Along with this, Year 7 translated Sonnets into modern day songs and verses and recognised how Shakespeare’s iambic pentameter is still used in our popular music today. Year 6 have started their study of ‘Much Ado About Nothing’ this week.

Year 6  English ignited a fascinating debate by studying the characters from ‘Much Ado About Nothing’ and thinking about what they would be like in today’s society. They have enjoyed showing off their amazing acting skills by creating freeze frames and performing key dialogue from Beatrice and Benedick’s interaction at the start of the play, alongside translating the characters’ insults to each other into modern day examples!  Their week culminated in a wonderful trip to the Globe Theatre on Friday, which included a fascinating trip around the theatre and a brilliant interactive workshop.

In music, the children were introduced to Elizabethan/Jacobean madrigals and dances and looked at famous madrigal composer John Wilbye, who lived in Trinity Square, Colchester and was a contemporary of Shakespeare. The children were also invited to find posters displayed around school with relevant Shakespeare quotes and find out which play each quote comes from and describe how they think it is still relevant to us today. As you can see a fantastic week was had by all.