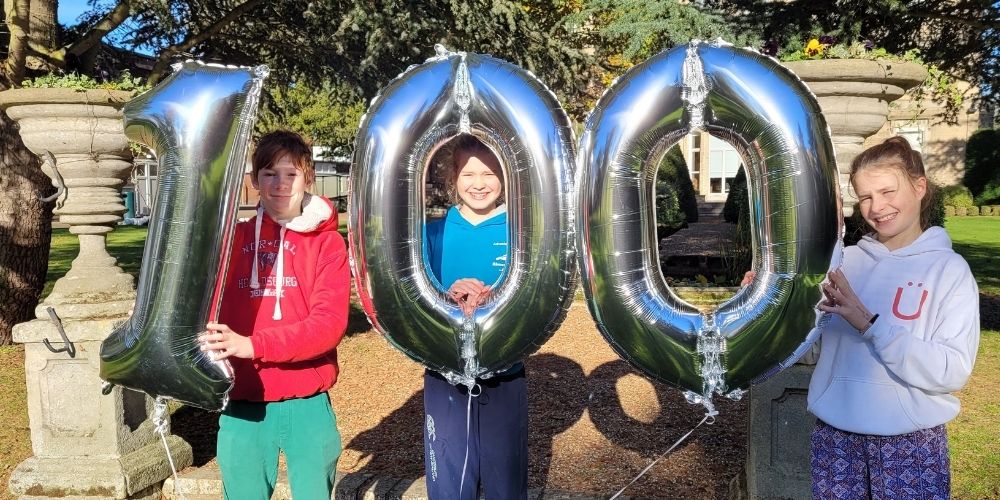 It was a birthday like no other! On Friday 5 November, Holmwood’s centenary celebrations started with a bang! We played all the traditional games from the chaotic animal games (which has been played at Holmwood since its first birthday) to the more cerebral mug game.  One of the highlights of the day was a visit from the Mayor of Colchester, who cut the centenary cake (designed by Fabio) and the grand finale was of course the spectacular firework display put on by Friends of Holmwood House.

The school has celebrated its birthday every year on the 5 November as it was on this day in 1921, that Mr and Mrs E. F. Duggan secured the lease on Holmwood House, Chitts Hill, Lexden.  It was the perfect site with several acres of land to allow them to fulfil their dream of opening a school, which would be realised at the start of the summer term in 1922.

With the country recovering from the turmoil of the First World War, the Spanish Flu pandemic, the Duggans wanted to provide children with an education that would prepare them for the world.  Their aim was “to develop the individuality and abilities of each child; to make them self-reliant and adaptable.” The world has changed a great deal during the school’s first century, but in many ways the uncertainties that the early cohort of pupils were experiencing then are uncannily familiar to us today and the Duggans’ underlying values still ring true.

Holmwood House pupils through the years have continued to benefit from the core ethos set in place by the Duggans. From transplant surgeons to newspaper editors, teachers to West End performers, Holmwood alumni have gone on to do varied and amazing things.  As one alumni put it, “Holmwood House gave me independence…the desire to learn and motivated me to do well in my everyday life.”

Edward Bond, only the sixth Head of Holmwood House School says “a modern education at Holmwood sees academic ambition at the forefront for all children, with competencies such as literacy, numeracy and scientific understanding developed in a rigorous yet exciting way. Yet the modern Holmwood still rests on the human values that the Duggans were passionate about, with pastoral care and individual development integral to the school,  taking advantage of the beautiful site bought by the Duggans all those years ago.”

On 5 November 2021, as the fireworks went off on the hockey pitches to mark the start of Holmwood House’s centenary celebrations, the Duggans would surely be incredibly proud.  The students of 2021 are continuing to benefit from the inspiring education they had envisaged, developing self reliance, individuality and adaptability; it turns out that these are as critical for the children of 2021 as they were for those three boys 100 years ago.