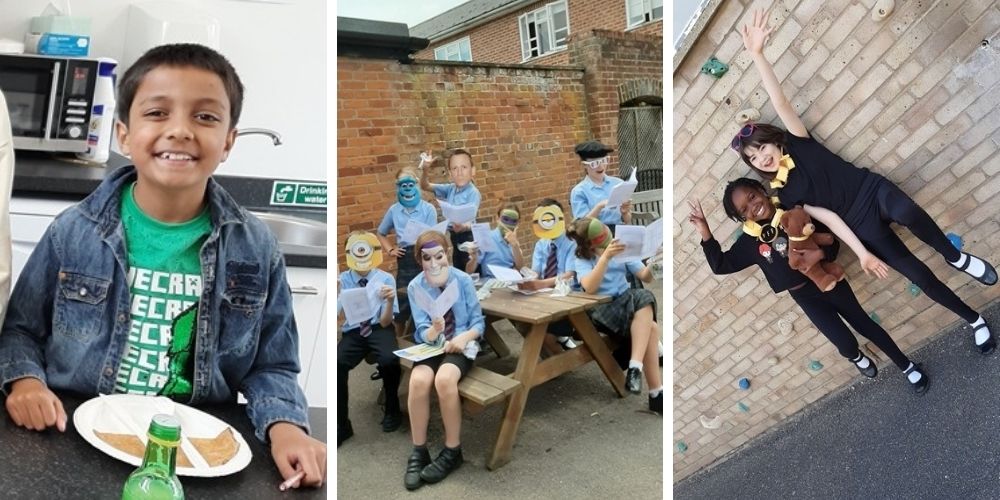 It has been a busy term in the French Department and everyone has had to reflect and draw on all they had learnt  this term as they completed some fun French activities.  There has been vocabulary paintball, a French themed “pop-up” cafe, pop videos, virtual discos and a whole afternoon where France came to Holmwood!

This term Year 8 have been learning about “Les parties du corps” and being able to use “j’ai mal…” accurately with masculine, feminine and plural vocabulary. What better way of practising the grammar than a round or two of “Le Paintball” on the field! Two teams had to compete against each other to see which team had collected the most “splats”. They then had to accurately record their “parties du corps” phrases in French on their grammar grids! Un, deux, trois…allez les équipes!

This term Year 7’s topic has been “À table!” and “Manger et Boire” and what better way to practise our speaking skills than to open, run and visit our very own “Café Monstre Masqué” They really enjoyed acting out all the different role play parts in French and even had Euros to spend when ordering their food. They also got a chance to bake Bastille day biscuits not only to link in with our café theme but also because they have been researching facts about La Révolution Française. Bon Appétit les Monstres Masqués!

Year 6 have been looking at the verb “jouer” (to play) with their topic on sports and games so we thought it would be fun to challenge ourselves and see if we could use it to talk about musical instruments and create our very own pop groups. The children had to work collaboratively to come up with a band name, logo, costumes, genre of music, song, members of the group and the instruments they play and create a mood board and pop video that they had to present to the class in French. The genres included la musique pop, classique, rock et rap and some groups even performed their own lyrics and songs! Their videos were creative and great fun to make and watch! Encore! Encore!

Watch this space for tour dates and autographs!  C’est génial!

This term Year 5 have been busy practising their Au Café role plays and playing the parts of serveurs/ serveuses and client / cliente. The Garden Block was the perfect café! They also got a chance to bake Bastille day biscuits not only to link in with our café theme but also because they have been researching facts about La Révolution Française. We ended the term with a visit to a virtual “Discothèque” where they had to learn some funky moves and use the instructions in French to create and choreograph their own dance and teach their peers! Très cool les 5!

As Year 4 were unable to go on the much loved residential trip to France this term…France came to Holmwood!  The children were super excited as they started the afternoon adventure  being “interrogated” at our very own French passport control and could only have their carte d’identité stamped if they were able to answer all the questions in French! Allons-y!  Their next stop was to “La Crêperie” where they got to eat savoury and sweet crêpes and drink French squash! The children all had to order their food and drink in French! Bon appétit!  The final stop was at “Le Supermarché” where they had to purchase souvenir items with their Euros. They had to ask and pay for everything in French! Bravo! Everyone loved the French bonbons!

My thanks to the Front Office staff (aka Passport Control), Tina and the catering staff for the food and the site team for the gazebo on a very windy day!